Download/print
Share
Published on 7 May 2021
Written by PC Ahmed Dada, Leicestershire Police
Handover notes: How the skills I gained as a police community support officer equipped me in my current duty
Going equipped
1 min read 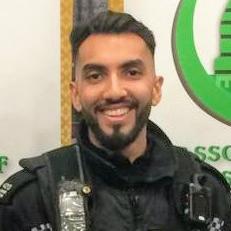 After I finished college, I decided to follow in my dad’s footsteps and join him as a PCSO, working in the diverse area of Leicester’s West End. Although expectations of PCSOs changed during my five years in the role, the core tasks remained the same. Community engagement and high-visibility patrols were central to our duties.

Four years ago, I became a PC. The main difference is that as a PC, I am more involved in investigations and arrests, now that I’ve 'got the power'! What I miss about being a PCSO is the community engagement with people who often saw PCSOs as their first link to the police. The conversations I had with members of the public were different to those I have as a PC. It also took me a while to get used to the fact that I would be the one arresting the suspect, as that was something I never did as a PCSO.

The skills I gained from being a PCSO have been paramount in assisting me to be a PC. As a PCSO, the only tools I had were my communication skills and these have unquestionably been the best tools any PC could have. As a new PC, I’ve drawn on these skills when dealing with an extremely violent GBH suspect. I was able to talk him down and keep the situation calm without having to use any of my PPE.

As a PCSO, I worked with PCs on a daily basis, which gave me insight into the organisational culture, as well as in-depth knowledge about what the role of PC required. I think that encouraging PCSOs to become PCs may have benefits for retention of officers. I certainly feel that it was the best route into policing for me.